UPDATE – This recently sunk – for a second time.

Japanese marine contractor Modec has finally installed its first 500kW Skwid hybrid wind/tidal offshore turbine prototype off the coast of southwestern Japan, roughly one year after its initial installation plans were postponed when a key component sank in rough seas.

The Tokyo-based company initially planned to start testing the Skwid off the western coast of the southern Japanese island of Kyushu in October 2013.

However, the unexpected sinking of the prototype’s marine turbine component in Japan’s Inland Sea, off the northern coast of Kyushu, forced it to delay its installation plans until 30 October of this year.

The machine — which matches a three-bladed vertical-axis wind turbine (VAWT) with a Savonius ocean-current turbine — is now installed off the coast of Yobuko, Saga prefecture, west of the city of Fukuoka.

Modec has told Recharge that it plans to test the prototype for about a year.

The company’s first renewable energy design offers an output capacity of 500kW in winds of 13 metres per second (m/s), nosing toward 1MW in velocities of 16m/s. It designed the 24-metre-diameter Darrieus VAWT to capture two times more energy than a similarly sized onshore turbine.

Modec hopes to eventually lease the Skwid to fishing co-operatives on the western coast of Kyushu. It has also said that the Skwid could potentially be used to supply electricity to isolated islands.

The Skwid looks like the many spinning squid drying machines found along Yobuko Port. Their offshore location was an area previously not utilised by the local fishing industry. This promotional video explains the project in a fun way. 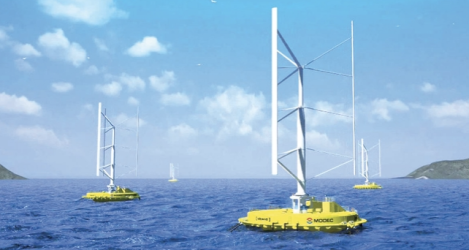